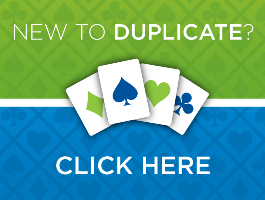 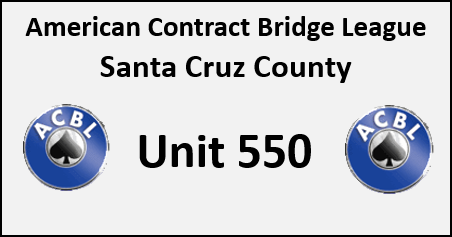 You must be a registered member of the UNIT and have created an account to login.

Check this box if you want the system save your login information for one year or until you logout.

Results may not be posted for up to 1 hour after game.
Official masterpoints awards are provided by ACBL.

Unit 550 Mission: The Santa Cruz Bridge Center (SCBC), Unit 550 of the American Contract Bridge League (ACBL), promotes the game of bridge, supports bridge clubs running games on www.bridgebase.com (BBO), and provides a pleasant, fun environment for learning and playing bridge. On BBO, our games are termed "vClub" because they can be found within the Virtual Club section. We would be pleased to assist you getting on BBO to enjoy our games.

Game Calendar & Schedules: The SCBC vClubs run daily games throughout the day. Some are open to players of all levels, termed "Open Games", while others are reserved for newcomers, novice and/or intermediate players. Contact us at info@santacruzbridge.org with questions or partner requests. Clicking Calendar displays game time, level, table fee for games and classes.

Game Results: Click Results in the left side menu bar or on the results logos in the table to the right or on the suit symbols ♣ / ♦ in the Game Calendar.

Masterpoints & Game Winners: Significant bridge accomplishments by our members are found under Accolades; including a listing of all SCBC Life Masters.

If you have any questions about games, lessons, or the SCBC, send us an email at info@santacruzbridge.org.

We look forward to "seeing" you at the virtual tables!

Your Unit 550 Board of Directors